You are in:
Home/ In the news/ EEAST nomination for ALF volunteer award: Keith Marshall 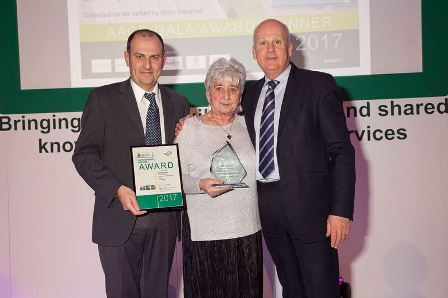 One our volunteers has been recognised nationally at the Ambulance Leadership Forum awards for his dedicated years of service.

Keith Marshall, who volunteered with us for five years, made a massive contribution to our service and volunteers. This is reflected in how well known he was across the Trust, especially in Suffolk.

Keith joined the Trust as a Community First Responder (CFR) with his wife, Mary.  Together they established the Wattisham Community First Responder Group. They raised the money required to set the group up and recruited volunteers from the commuinty to be CFRs and help save lives. A year into his CFR role he attended a 999 emergency and suffered a cardiac arrest whilst attending the patient.  Thankfully, Keith was resuscitated and could continue making a positive contribution to EEAST and his community.

Following his cardiac arrest, Keith stepped down as a CFR but continued to co-ordinate and manage the Wattisham CFR group. He also was elected as a governor for the Trust when it was applying for NHS Foundation Trust status.  He then joined the Trust’s User Group, helping out at events, taking an active role in the Infection, Prevention and Control group and being a loyal advocate for the Trust at partnership meetings.

In 2014, Keith’s efforts were recognised when he was given the Trust’s Distinguished Service Award, for the effort and value that he gave to the service and to his community. At the time, Keith said: “EEAST has given me one of the most rewarding compliments a volunteer could ever imagine and I am immensely proud in being chosen to receive the award.”

He continued, with Mary, to give basic life support and defibrillator training in the local community to all kinds of groups, from school children upwards.  And he continued to help raise funds for Automatic External Defibrillators. Indeed the third of these was placed in the community just a couple of weeks ago, leaving one part of Keith’s legacy locally for the benefit of others.

Chief Executive Robert Morton said: “I had the pleasure to meet Keith. His knowledge and expertise made him an incredibly valued asset to the Trust, and we will be forever grateful for the thousands of hours he volunteered to help our service – whether through his community first responder or Trust User Group work. Keith was a friend to the teams that had the pleasure of working with him, and he will be sorely missed.”

Keith’s commitment to volunteering and helping the ambulance service was exceptional. Keith remains in our thoughts to this day, and our condolences go out to Mary and Keith’s family and friends.