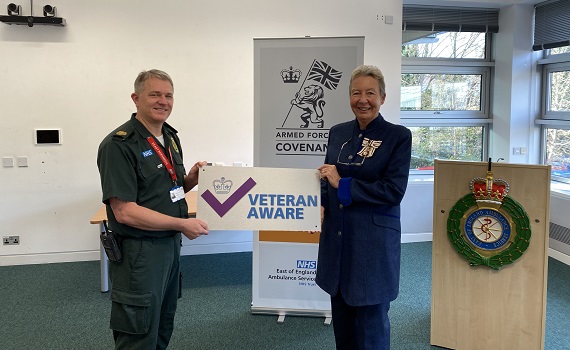 East of England Ambulance Service NHS Trust (EEAST) has been recognised as an exemplar in providing the best standards of care and support towards the Armed Forces community.

At a ceremony at the Trust’s headquarters in Melbourn at the end of November, EEAST received the Veteran Aware accreditation by Her Majesty’s Lord-Lieutenant for Cambridgeshire, Mrs Julie Spence OBE QPM.

EEAST had become the second ambulance service to be given this gold-standard accreditation from the Veterans Covenant Healthcare Alliance (VCHA) in April, but, due to Covid restrictions, the official handing over ceremony had to be delayed.

The Trust also holds the Gold award from the Ministry of Defence Employer Recognition scheme, have signed the Armed Forces covenant and are part of the wider NHS Step into Health network.

Tom Abell, Chief Executive of EEAST, said: “I’m really pleased to accept this award on behalf of the Trust.

“The role of veterans within the Trust is extremely important to us as an organisation in providing fantastic care to the communities that we serve.

“This award represents a huge achievement for lots of people within the organisation who have worked hard to improve the way we support veterans within the workplace at EEAST.

“Clearly moving forwards one of our key priorities is how we can build on this further to provide fantastic career opportunities for people coming out of the armed services.

“We want to make sure we are looking after veterans and supporting them to have long and fulfilling roles within the organisation so we can continue great care to our patients and communities.”

“We have many veterans working across the Trust, not just in frontline roles, but in all areas, including in support services, fleet, Ambulance Operation Centres (AOC) and in back-office roles.

“It is important to know that we are an inclusive employer and for this award to be given to us is a great recognition of some of the work we have done and continue to do, to support all of our staffing.”