You are in:
Home/ In the news/ EEAST crew helps baby Charlie take his first breath! 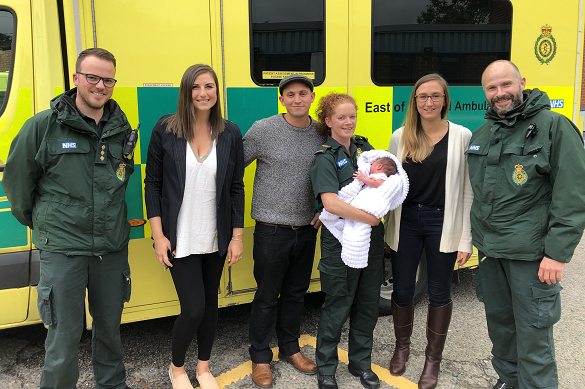 During the early hours of the morning on Tuesday 4th June, our Ambulance Operations Centre (AOC) in Norwich received an emergency call from a midwife who had delivered a baby boy at a new mother’s home in Kimbolton, Cambridgeshire.

What ensued was every parent’s worst nightmare - the baby had not taken any breaths since being born.

Thirty minutes from when the initial emergency call was made, our LOM were able to update control to let them know that the newborn baby had taken his first breaths and was doing well.

On Wednesday 12th June, parents Helen and Simon were able to thank the EEAST staff who responded that evening along with baby Charlie.

Eloise Murphy, RRV Paramedic who was keen to meet with Charlie and his parents said: “It was an absolute pleasure to be able to meet with the family and hold baby Charlie.”

She also offered apologies to her colleagues for holding onto Charlie for much longer than they did!

New mum Helen said: “Words can’t describe the appreciation we have for your amazing team who helped us on the night of the 4th June.  We will be forever grateful.

You kept us calm and reassured throughout a very scary experience. The professionalism and dedication of the whole team was brilliant, alongside some well needed humour!”

The team effort from the call handler and dispatcher to the crews that went out to baby Charlie all played an important role that allowed for this happy ending.

Helen said: “Keep up the amazing work you do! You are all part of a story that will be forever told.”