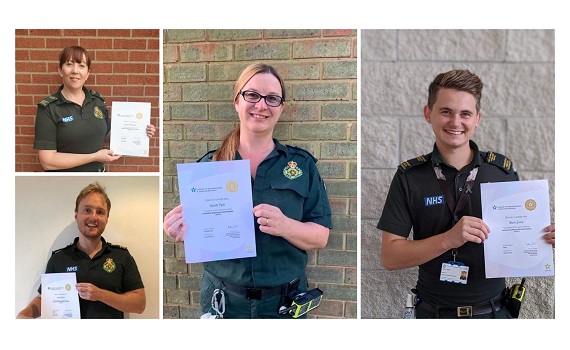 The East of England Ambulance Service (EEAST) is celebrating after its first group of apprentices passed their courses to become qualified emergency medical technicians.

A national programme, the level 4 associate ambulance practitioner apprenticeship offers an innovative way to gain a higher-level qualification in emergency care by combining a full-time job with study. Apprentices benefit from earning whilst they study and having their fees paid for by the Trust.

The four apprentices – Sarah Batchelor, Sam Eaton, Mark Jones and Sarah Pym – passed their apprenticeship in August and will now go on to work as emergency medical technicians  as part of a two-person ambulance crew responding to emergency (999) and urgent calls.

The course takes 18 months to complete, with the apprentices required to achieve a level 3 award in emergency response driving and a level 4 associate ambulance practitioner (QCF) diploma.

The apprenticeship opens the door to higher education and the opportunity to gain paramedic qualifications. An apprenticeship pathway to become a paramedic is set to be introduced at EEAST next year, with all four newly qualified EMTs interested in following that route.

Mark Stead, education manager at EEAST, said: “We are delighted to have our first four apprentices successfully complete their end point assessment. The four apprentices have worked incredibly hard and their dedication has been recognised with two merits and two distinction grades being awarded.

“Many congratulations to Sarah, Sam, Mark and Sarah and to everyone in the Trust who supported them on their learning journey. We wish them a long and successful career at the East of England Ambulance Service.”

Mark Jones, 25, who is based at Thurrock Ambulance Station, has been with EEAST for four years and took up the apprenticeship to progress his career.

“I jumped at the chance of the apprenticeship to further my career with the ambulance service and see it as a stepping stone to becoming a paramedic.

“I would say that dedication and a willingness to learn is crucial to completing the course, as there is lot to take in, but there is extensive support to help you throughout.”

Sarah Pym, 42, was a support teacher at a SEN (special educational needs) school before starting the apprenticeship and is based at Harlow Ambulance Station.

She said: “I learnt so much in a short space of time in the apprenticeship programme and the support we received from Kevin Cowan [training centre and quality assurance manager at Welwyn Garden City] and the tutors was amazing. I had such a positive experience from training to operations and am glad I took the opportunity to change my career.

“In the future I would like to undertake the training to become a paramedic and longer term, given my background in teaching, would like to be involved in training.”

Sam Eaton, 29, who works out of Potter’s Bay Ambulance Station, said: “The tutors were excellent in guiding us through the course and I would definitely recommend the apprenticeship to people looking to further their career with the ambulance service.”

Sarah Batchelor, 46, who works out of Huntingdon Ambulance Station, said: “I have been interested in working for the ambulance service for a long time, but I wasn’t in a position to pursue it until I saw the advert for the apprenticeship.

“As someone who has come back to the classroom after an absence, the course was a bit of a shock to the system to start off with but everyone at the training centre was so supportive and it was a positive experience.”

If you would like to find out more about becoming an apprentice at East of England Ambulance Service, please email apprenticeships@eastamb.nhs.uk