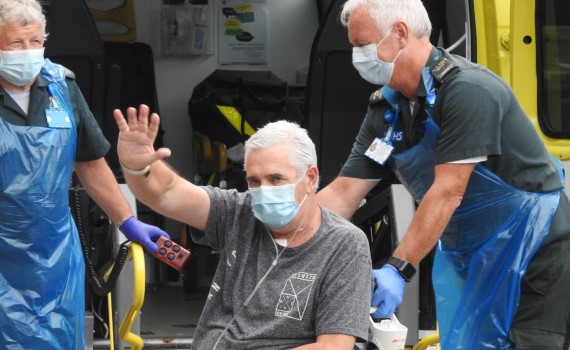 Nigel, 57, first fell ill on Monday June 8th, after both he and his partner had experienced the virus ‘in a small way’. His partner Lisa Oldershaw – also a Patient Transport Driver who works out of Clacton - said Nigel went upstairs to get a shave before watching a film, and started coughing suddenly.

“I kept an eye on him and was not happy,” she said.

“I called a paramedic to get advice and when I explained his heart rate and the other observations I’d made, he told me to call 999.”

At 10.20pm he was taken to Colchester Hospital and admitted to intensive care the next day.

By the following Sunday, Lisa was told that despite being given two different trial drugs to combat the virus, there was no more they could do – and it was possible that he might never regain consciousness.

His last chance was a transfer to Royal Papworth Hospital for therapy on an Extra Corporeal Membrane Oxygenation (ECMO) machine.

This machine is similar to the heart-lung bypass machines used for open heart surgery. There are very few in the country and patients have to be carefully assessed before being allocated to one of the precious spaces.

Nigel’s age was against him as space on the machines is usually assigned to younger people with a higher chance of survival, but when Lisa told staff at Papworth he was normally very active and fit, it was decided to give him the chance.

On arrival it was discovered that Nigel had also suffered a brain bleed, which caused complications with the blood-thinning drugs he needed to be given.

It was estimated that he would have to spend 4-6 weeks on the ECMO machine, but within ten days Nigel had recovered consciousness and he was soon able to be transferred back to Colchester Hospital for further recuperation. He has now been discharged home to Clacton on Sea.

Lisa said: “Nigel is still on oxygen, but we’re getting there. It’s amazing what he has done in five weeks. The specialist said that there were people who had spent 60 days on the ECMO machine, but he recovered within 10 days and within five weeks of feeling ill, has been able to come home.

“We would like to thank the two paramedics, who acted very professionally and quickly to get Nigel to Hospital, and also the staff at Colchester and Papworth Hospitals – without their care, he would not be here today.”