You are in:
Home/ In the news/ Dementia friendly ambulances hit the road 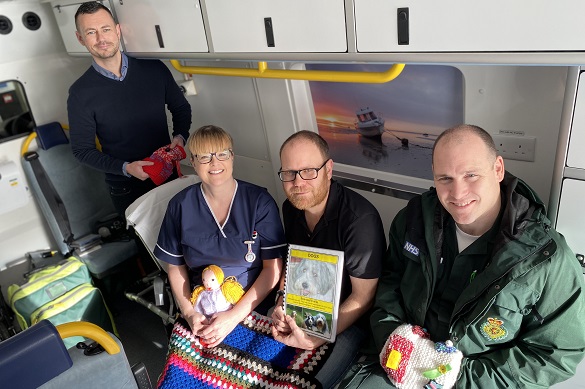 Two new dementia friendly ambulances hit the road in Southend last week thanks to a joint project run by a team from East of England Ambulance Service (EEAST) and Southend University Hospital.

The ambulances have been kitted out to make them more ‘dementia friendly.’ Welcoming photographs have been added to their internal windows, showing Southend seafront and the beach huts in Chalkwell, in order to make the ambulance less clinical and more familiar and inviting.

Crews are also carrying individual patient resource packs containing knitted twiddle muffs and twiddle blankets which provide reassurance and comfort for patients, giving them something to do with their hands and help soothe agitation. There is also a CD player with a range of calming music.

The newly kitted out ambulances are already proving to be a huge hit. One of the ambulances, on its first day on the road, picked up a dementia patient from a care home and the use of soothing music in the back of the ambulance helped to calm them during their journey.

Laura Spears, Assistant General Manager (AGM) for EEAST in South Essex said: "This is a really exciting project and we are hoping that it makes a big difference for many of our patients in the community.

"We are looking forward to hearing some of the feedback over the coming weeks. The dementia friendly ambulance was a joint initiative with the hospital and we are already considering the possibility of launching something similar in other areas, if we can fundraise in conjunction with local trusts."

Sarah Ecclestone, Senior Sister in the Emergency Department (ED) at Southend University Hospital said: "It’s such a simple idea, but will make such a huge difference to dementia patients.

"Such pictures and resources on the wards already make a huge positive impact on patients; this is just extending that on the road. The bright ambulance interiors will also help make the ambulances more welcoming for children and patients with learning difficulties."

The photos used inside the ambulance were taken by Leigh-on-Sea amateur photographer Chris Eastty, who is also an ED flow coordinator at Southend University Hospital. They were installed by Radwraps. Funding for the project was given by the dementia fund from Southend Hospital Charity.