You are in:
Home/ In the news/ Deadly tumour discovered in time for teenage girl to fight for life - and win!

Deadly tumour discovered in time for teenage girl to fight for life - and win! 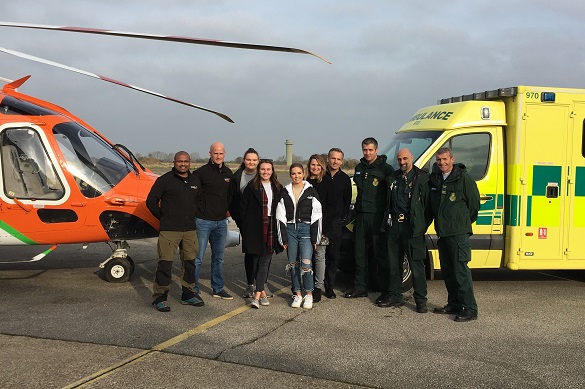 One year ago, 18 year old Alice’s life was suddenly turned upside down. Today (10 March), to celebrate her fantastic recovery, she met the people who played a crucial role in saving her life…

At just 18 years old, everything changed for Alice Lunn and her family one seemingly ordinary March night. Alice recalls: “My sister heard me struggling to breathe in the night. When she checked on me, my skin was grey. She instantly got me downstairs to mum and dad who called 999 - it was then that I stopped breathing completely.”

Alice’s dad, James, describes: “It all happened so fast. The paramedics from the East of England ambulance service were with us within minutes and as soon as they reached the door they took one look at Alice, dumped their bags and started CPR.”

James explains: “It was such a relief to see all these people who were trying to help. I can still remember hearing the machines beeping and being so worried that at any second they could walk out of our kitchen and say she wasn’t alive anymore.”

Thankfully, that wasn’t the case. The team from the East of England Ambulance Service Trust (EEAST) had done an incredible job of restarting Alice’s heart, but following her second cardiac arrest Magpas Air Ambulance had to utilise their advanced medical skills.

In the kitchen of her home in Godmanchester, they placed Alice under general anaesthetic and performed surgical procedures to take over her breathing and try to stabilise her condition (treatments usually only available in a hospital). One of which involved making a small incision in the side of Alice’s chest; it was at this point that Magpas Critical Care Paramedic, Dan Read with his extensive knowledge and experience, recognised that something was seriously wrong.

Working together, Magpas Air Ambulance and EEAST got Alice to hospital. It was then the true cause of Alice’s respiratory arrests came to light.

It transpired Alice had a tumour in her chest cavity that had grown so big it had blocked her airway and crushed her lung. Alice went straight in for surgery and spent the next few months in a serious condition at Royal Papworth and Addenbrooke’s Hospitals where they helped her to breathe on her own again and completed the cancer treatment for the Lymphoma she was diagnosed with.

Thanks to the immediate response of EEAST, the expert knowledge and care Magpas Air Ambulance provided and the specialist treatment from both hospitals, Alice has made a near full recovery.

She continues: “I’m now in remission – and considering everything I’ve been through though I’m doing really well! I’m about to sit the last of my A-levels and hoping to go to Birmingham University later this year.”

Today marks a year since Alice and her family’s horrific ordeal. To help celebrate Alice’s fantastic recovery, she and her father James visited the Magpas Air Ambulance Operations Base this morning to meet the group of people who epitomised the word ‘teamwork’ on the night of Alice’s respiratory arrest and saved her life.

With so many important questions to ask, she spoke to EEAST crew Napoleon Georgoulias, Charlie Harris and Adam Bright - as well as Magpas Air Ambulance Doctor, Rupert Hurry and Critical Care Paramedic, Dan Read - all of whom were able to shine a light on what happened on the night of the 10 March 2019.

Alice explains how today felt, “It was so good to meet and thank them all. I mean, you can’t really thank them, not enough for what they did, but it was good to finally say it.”

Dan Read explains: “I could not be happier with how well Alice has recovered! It was one of the more challenging cases of my career and one I will remember forever. I sincerely wish Alice and her family all the best for the future and am thrilled that she can look forward to a full and exciting life.”

Adam Bright, Leading Operations Manager for North Cambridgeshire at EEAST said: “This was a real team effort, from the initial actions by our crew to the advanced interventions by the Magpas Air Ambulance team and subsequent specialist treatment at hospital. It was a call out we will never forget. As far as jobs go, this was emotive and upsetting for all who attended. But in terms of outcomes, it doesn’t get any better - and this is the reason we do what we do!”

James sums up: “It was wonderful to say to all these medics and to know that as a result of the brilliant work they did, my daughter Alice is here, she’s alive and doing really well. We’re very lucky to have these incredible services on our doorstep.

"Of course I knew the role of the ambulance service crew and I was really, really pleased they were able to get to Alice quickly and start the CPR. The thing I’ve since learnt and now fully appreciate is the added skills and the added value of the Magpas Air Ambulance medical team.

"For this charity’s team to come with their advanced skills, meant that they were able to provide some surgical procedures and really stabilise Alice right there in our house, which would have definitely saved time and quite possibly saved her life.”