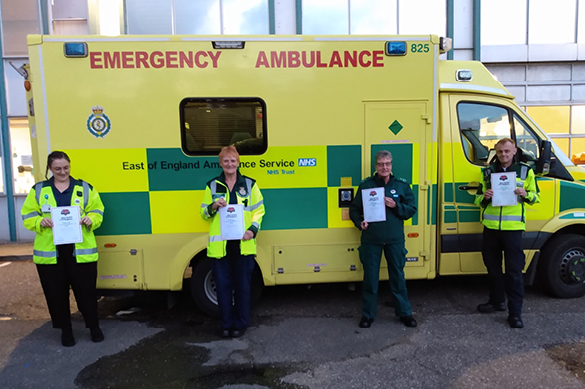 A group of volunteers who give up their time to support the East of England Ambulance Service NHS Trust (EEAST) have been named as heroes for attending emergency calls during lockdown and helping vulnerable people.

The West Norfolk Community First Responder (CFR) response car team were given certificates after being named as “Love West Norfolk Heroes” on Friday.

The group’s nomination said: “These guys are trained to attend 999 emergencies. They are all volunteers and receive no funding from the NHS.

“They have been out attending emergencies across west Norfolk throughout the lockdown and have also been helping local communities by collecting shopping and prescriptions.”

Andrew Barlow,  EEAST’s Community Response Manager for Norfolk, Waveney and West Suffolk, said: “We are incredibly proud of our volunteer CFRs, who make a huge difference to their communities every single day.

“They showed enormous dedication during the initial phases of the coronavirus pandemic and went above and beyond to support their local communities by not only answering 999 calls but also helping vulnerable people to stay safe.

“On behalf of everyone at EEAST I would like to thank them for their commitment and congratulate them on this well-deserved award.”

The commendations were arranged by #LoveWestNorfolk, which is a partnership of the Borough Council of King’s Lynn and West Norfolk, The College of West Anglia and Freebridge Community Housing, who will organise a special reception for all the winners when it is safe to do so.