You are in:
Home/ In the news/ Community first responder fundraising day hailed as ‘a fantastic success’ 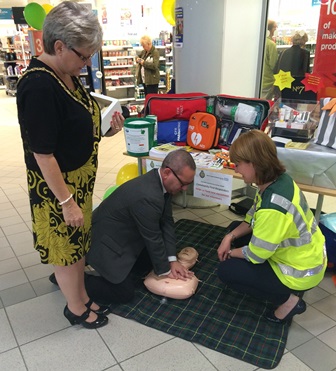 The role of a community first responder (CFR) isn’t one that everyone is aware of, but a network of Hertfordshire life-savers have ensured the people of Welwyn are after a fundraising event they ran on Friday (17th June).

CFRs Sharon Smith, of Newgate, and Ray Saunders of St Albans spent the day teaching the public basic lifesaving skills such as cardio pulmonary resuscitation (CPR) and even attracted attention from the Deputy Mayor of Welwyn Hatfield, Lynne Sparks.

Sharon, who was on duty and ended up treating someone who fell ill in the Howard Centre where the stall was set up, said: “The day was a fantastic success with lots of interest and donations from the public.”

The stall was set up outside Boots who generously donated raffle prizes and continued fundraising throughout the weekend to raise a total of £345 which will be put towards purchasing new equipment for the CFR groups in the area, and Boots HQ have also pledged to donate following the event.

Sharon added: “The Welwyn residents really engaged with the cause and there was genuine interest from some wanting to become CFRs to restart the Welwyn group.”

Sharon said: “Our thanks go to Alison Gelling, Store Manager of Boots and her team who were amazing support on the day and also thanks to the Howard Centre management team.”