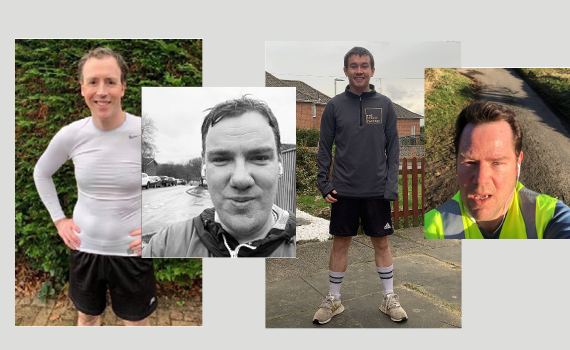 Four members of a running club in Norfolk have completed the ‘Outrun an Ambulance’ challenge to raise money for the East of England Ambulance Service (EEAST).

Tom Morgan, Josh Hollebon, Tom Woods and Stuart Long from the Yare Valley Churches running club have each run 92 miles during February to complete the virtual challenge by surpassing the mileage an ambulance covers on an average shift.

The team chose the mileage clocked-up by crews at their local station in Longwater.

Tom Woods said: “We have completed similar feats previously and were keen for something new. With Tom Morgan's wife working for EEAST, signing up to Outrun an Ambulance seemed the perfect way to embark upon our next challenge.

“We set out to each run over 92 miles in February and, with a day to spare on Sunday 27th February, we had all completed this task.

“Finding the time in our busy working weeks and running a longer distance compared to what we usually do has proved a real challenge, particularly as we had to deal with a couple of injuries here and there.

“Sunday’s finish was an extremely proud moment for all of us and we were all pleased to have exceeded our fundraising targets!”

The four members have now raised more than £1000 for the East of England Ambulance Service Charity, which will be used to provide enhanced facilities and wellbeing support for staff and volunteers.

You can donate towards the Yare Valley Churches Running Club on Just Giving.

Outrun an Ambulance is designed to suit a wide range of people and abilities as the mileage targets range from 37 miles to 196 miles that are covered at Huntingdon and King’s Lynn ambulance stations respectively.

Despite the name, you don’t have to run the challenge and can walk, swim, cycle, anything - as long as it is self-propelled. Fundraisers can choose their timeframe, up to a maximum of three months, to ‘outrun’ the distance by at least one mile, either individually or as part of a team.

If you are feeling inspired to embark upon the challenge, more information can be found on the Outrun an Ambulance website.