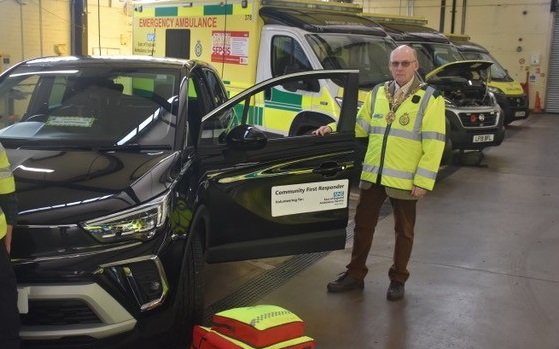 The Mayor of Cambridge visited Cambridge Ambulance Station to find out more about a project that has been helping Community First Responders (CFR) support patients across a broader area of the region by introducing designated vehicles for them based at stations.

The Mayor, Councillor Russ McPherson, inspected the recently delivered Vauxhall Crossland which has already responded to 60 patients since it was delivered to Cambridge Station in December 2021.

The car is one of six operating across the region in the NHS England-funded project with the others based at Luton, Kings Lynn, Waveney, Ipswich and Colchester.

The Mayor knows first-hand the vital work of Community First Responders: he has been a CFR since 2004 and volunteers at EEAST to support his local community.

CFRs book ‘shifts’ on the car which operates without blue lights and, at times of high demand, are able to respond to incidents across a broader area than would have been the case if they were responding from their homes.

Lorna Hayes, Head of Community Response said: “The support from NHS England to enhance volunteering over the winter period has enabled us to deliver more care to patients and also to provide the opportunity for new recruits to be mentored.

“The cars also allow our volunteers to have greater patient contact than when responding from home addresses and enables us to respond to communities where there are no CFRs available. The Cambridgeshire based car has already provided many hours of cover and has attended 60 patients.”

Councillor McPherson said: “I have always been enormously proud to be a part of the EEAST family. I have tremendous regard for all Community First Responders who give many hours to both responding and training in order to support their community in a unique way.

“I am equally proud to have been asked to launch the new responder vehicle for Cambridge and the close surrounding area. As Mayor of Cambridge, it is not only important to promote and support the Community First Responder teams, but to recognise the significance of the families at home that support them, without which we could not possibly do our job.”

Pictured - Councillor Russ McPherson met with Andy Nightingale, CFR co-ordinator from Sawston and Alex Baldock who is a CFR and currently studying for his Paramedical Science degree at Hatfield University.