You are in:
Home/ In the news/ Cardiac arrest survivor organises lifesaving lesson 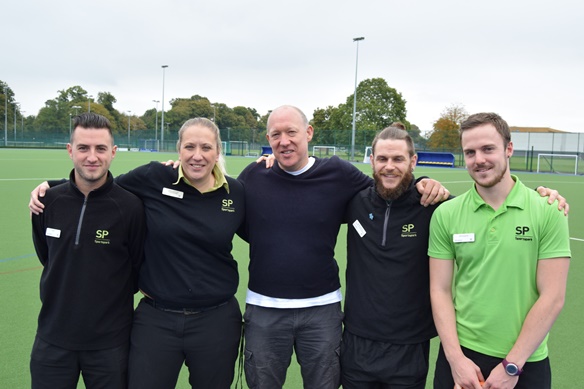 A cardiac arrest survivor will return to the place where his heart stopped to deliver a lifesaving lesson.

Roger Baines, a senior lecturer at the University of East Anglia (UEA) in Norwich, was playing football at the UEA Sportspark on 28th March when he felt dizzy and collapsed.

The 51-year-old was saved by his quick-thinking teammates and trained Sportspark staff who performed cardiopulmonary resuscitation (CPR) and shocked him once with a defibrillator before the arrival of East of England Ambulance Service NHS Trust (EEAST) and East Anglian Air Ambulance staff.

He is making a strong recovery after spending two weeks in the cardiac unit at the Norfolk and Norwich University Hospital and having an implantable cardioverter defibrillator (ICD) fitted in his chest.

Roger now wants to give something back by raising awareness of the value of lifesaving CPR and having accessible defibrillators in public places.

On Monday 16th October, he will return to the Sportspark after organising a CPR training event on Restart a Heart Day.

Staff from EEAST will be on hand to teach lifesaving skills in the Kiff Matheson suite between 10am and 2pm on the day.

Roger, who is a French language and Applied Translation Studies academic, said he owed his life to the many “incredible” people who rushed to his aid and the “outstanding” treatment he received at every stage. He particularly praised his “magnificent seven” from the Sportspark  - Chris Lynch, Tom Dart, Luke Coping, James Warren, Matthew Critchfield, Anna Linsmith, and Iain Kermode.

“For me this is the perfect way of bringing together the Sportspark staff who were instrumental in saving my life, training other people, and highlighting the great work of the ambulance staff.

“I did not know how to do CPR before and I am looking forward to the training. I am back at work now and playing football at the Sportspark again,” he said.

Andrew Barlow, Community Collaboration Manager for Norfolk, said: “Every second counts when someone is in cardiac arrest and early CPR and use of a defibrillator dramatically increase the chances of survival. We are looking forward to training as many people as possible on Restart a Heart Day.”

Andrew Lockey, Honorary Secretary of the Resuscitation Council (UK), said: “For this year’s Restart a Heart day, we will see unprecedented numbers of young people being taught the vital lifesaving skill of CPR. Endeavours ranging from individual effort through to nationally coordinated activity will show that there is a desire to improve the chances of survival for victims of cardiac arrest. Everyone can be a lifesaver and the skills are easy to learn, either online or with face-to-face training. Most cardiac arrests happen in the home, so everyone should ensure that they are those around them are skilled up to save a life.”