You are in:
Home/ In the news/ Cardiac arrest survivor meets lifesaving crew 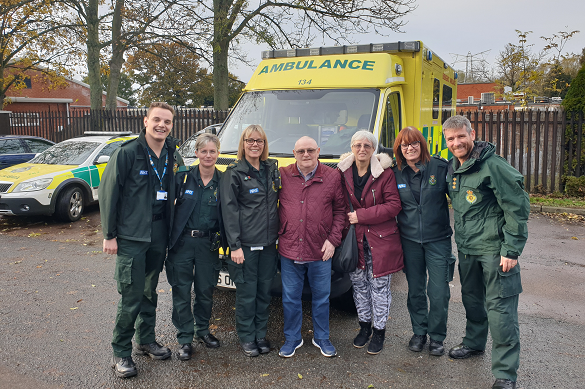 A man is lucky to be alive after surviving a cardiac arrest outside hospital, where the survival rate is around 8%.

A 999 call was received on 4 July by Bedford call handler, Ben Hawkins concerning a 62-year-old man who had collapsed in Bromham Road and was unresponsive.

During the call, Ben quickly realised the patient was in cardiac arrest. The call was made by the patient’s wife, who Ben coached through how to perform cardiopulmonary resuscitation (CPR). An ambulance from Bedford South Wing Hospital, and a leading operations manager (LOM) from Kempston ambulance station was dispatched and arrived on scene in just over four minutes.

The first crew on scene was staffed by Dianne Jenkins, Newly Qualified Paramedic, and Julie Manners, Emergency Medical Technician. The crew took over the already effective CPR, and proceeded to deliver two shocks as the LOM, Phil Alexander and Advanced Paramedic in Urgent Care, Sarah Park arrived who then placed a Lund University Cardiopulmonary Assist System (LUCAS) device on the patient. A further three shocks were delivered, and spontaneous circulation returned.

The patient, Bernie Dean, was taken to Bedford Hospital and was making respiratory effort as he was handed over to the awaiting medical team.

Remarkably Bernie and his wife Pauline, were able to visit his lifesavers at Kempston on Friday 15 November so he could thank the whole team.

In cards presented to each person, Bernie said: “There is no doubt that without your skills I would not be here today to say thank you. The 4th July is now my second ‘birth’ and I will always think of you all and your amazing efforts each year I am still here.”

Craig Borrett, Assistant General Manager for North Bedfordshire who organised the patient meet up, said: “I am so pleased to have been able to also meet with Bernie and Pauline.

“Thankfully everything was perfectly aligned for such an amazing outcome – from clear instructions given by Ben, Pauline providing effective CPR until our staff promptly arrived, as well as the advanced skills and knowledge of Phil and the interventions and care provided by Sarah, Dianne and Julie – a true EEAST team effort.”

Bernie is looking forward to getting back behind the wheel of various vehicles he owns and joked that he can’t wait to get back to work to give Pauline some much needed respite.