You are in:
Home/ In the news/ Cardiac arrest survivor, 26, thanks lifesavers 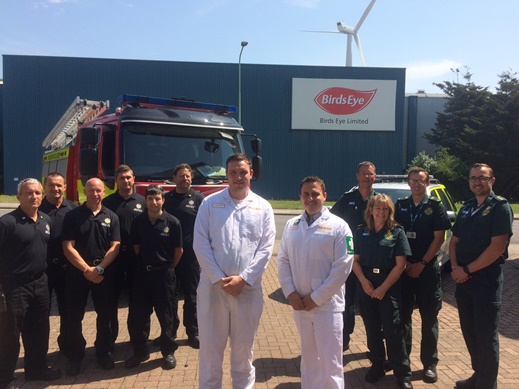 A first aider has been praised for his actions which helped save the life of a colleague in Suffolk.

Aaron Kent was working at Birds Eye in Lowestoft on 10th April when he collapsed and stopped breathing.

Factory first aider Chris Calver rushed to his side and began cardiopulmonary resuscitation (CPR) and used one of the company’s defibrillators on the 26-year-old who was in cardiac arrest.

After 10 shocks from a defibrillator Aaron was resuscitated at the scene and airlifted to the Norfolk and Norwich University Hospital.

He was reunited with his lifesavers on Wednesday (19th July) after making a full recovery.

Aaron cannot remember anything of the day he collapsed and has since had an implantable cardioverter defibrillator (ICD) fitted in his chest.

“I had a few weeks of sore ribs but I feel alright. I’m a lot better now and coming back to work was a bit odd because I was off for 10 weeks.

“I did not realise there were so many people that came out to me. I want to thank everyone who helped out,” he said.

Chris Calver was presented with a certificate from EEAST’s very own Chris Calver, who was the first paramedic on scene.

Rogan Day, a duty locality officer for EEAST, said the team were “absolutely delighted” to be reunited with Aaron. He added that the first aider’s actions were crucial.

“All of us feared the worst on the day. This was a real team effort. All of us are in agreement that without Chris, he [Aaron] would not be here today. It is really important that people understand the importance of early CPR and using a defibrillator.”