You are in:
Home/ In the news/ Bravery award for saving great grandmother's life 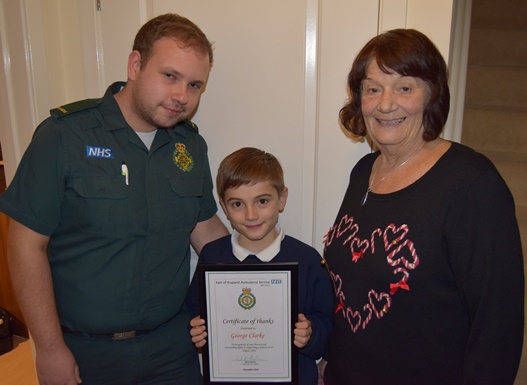 There's not many nine-year-olds that can say they have helped save a life.

But that is exactly what George Clarke did whilst he was sleeping over at his great grandmother's house this summer.

He was staying at Sandra Newton’s home in Carlton Colville, near Lowestoft, on 6th August when he heard her shouting in the middle of the night. She was confused and adamant that she didn’t need medical help.

However, George phoned his dad who dialled 999 for the 71-year-old who had fallen out of bed and was having a diabetes emergency.

George said: “She was shouting and had fallen on the floor and I could not make out what she was saying.”

Sandra, who has had diabetes for 11 years, was having a severe hypo.

Luke praised George for being “cool and calm” during the emergency. Following treatment at the scene, he managed to raise her blood sugar levels.

“Had it not been for his quick actions, it would have been a very different outcome,” he said.

Sandra added: “I was very lucky. If I had gone to the morning they reckon I would not have woken up. George was brilliant.”