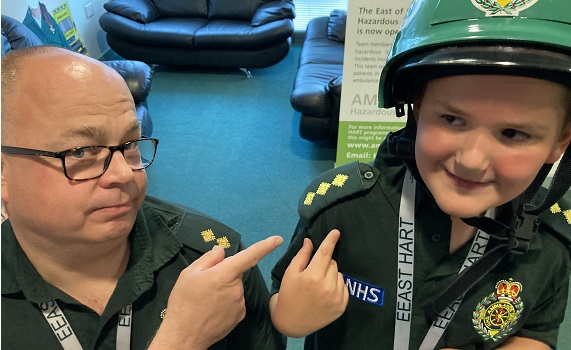 A boy with autism and ADHD who is obsessed with ambulances had his dream become a reality thanks to the East of England Ambulance Service (EEAST).

Kayden Turner, 8, from Loughton in Essex, became an honorary member of EEAST’s specialist operations team for a day at Great Notley Ambulance Station and fulfilled his wish to sit in an ambulance with the emergency blue lights on.

Paramedic David Elkington showed Kayden, his friends Faye and Vivianna, brothers Kaleb and Hunter Turner and his mum Louise around the station which is the base of EEAST’s Hazardous Area Response Team (HART).

HART attend the most complex incidents that EEAST is tasked with across the region and Kayden was shown around all the specialist equipment that is needed to deal with these jobs.

Kayden is no novice to healthcare as he has already had training in CPR and carries his first aid kit everywhere with him.

The event was organised by Grant a Smile, a social enterprise which helps disadvantaged families across Essex and surrounding areas.

Kayden’s mother, Louise, said: “I would like to thank David and everyone at the East of England Ambulance Service for allowing Kayden to visit and have his dream come true.

“He has been greatly looking forward to this visit and it exceeded all his expectations for him to learn about the ambulance service and the work they do.

David Elkington said: “It was great to meet Kayden and his family and I’m glad that he enjoyed his visit to Great Notley station.”