You are in:
Home/ In the news/ Award for 'little heroine' who saved uncle's life 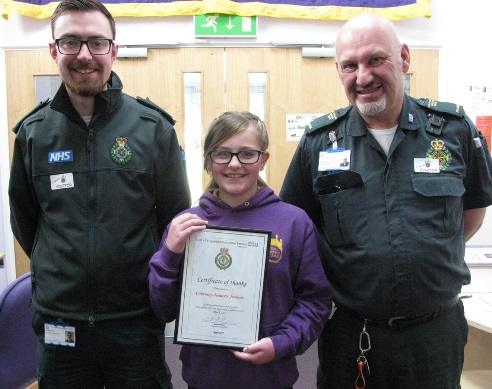 A “little heroine” has been praised for her actions which saved her uncle’s life just weeks ago.

When James Sizer collapsed on 24th March in Ely, 10-year-old Courtney-Jeanette Jeakins kept calm and acted quickly to dial 999 and put him in the recovery position.

Emergency Call Handler Robert Pitt and Paramedic Simon Wicker were so impressed that they both separately nominated her to receive recognition from the East of England Ambulance Service NHS Trust (EEAST).

The pair presented a certificate of thanks to the Lantern Primary School student at an assembly on Friday (5th May).

Robert said Courtney-Jeanette did an “incredible job” by being calm and composed and gave the address of the emergency and answered all his questions.

When Simon arrived in a rapid response vehicle three minutes later he found that the girl was doing “really well”.

“Without thinking, Courtney immediately called 999 as her uncle was having a seizure. She then proceeded to put him in the recovery position and kept him on his side and protected his airway. By the time I arrived on scene he had almost stopped fitting, but his niece stayed by his side softly talking to him and reassuring him. She’s a little heroine.”

“I could see how he [James] was laying that he was having a fit and I knew I had to be brave. It was lucky I had my phone on me,” she said.

She added that she was “excited and nervous” to receive her certificate.