You are in:
Home/ In the news/ Award for Essex paramedic who stopped drink driver 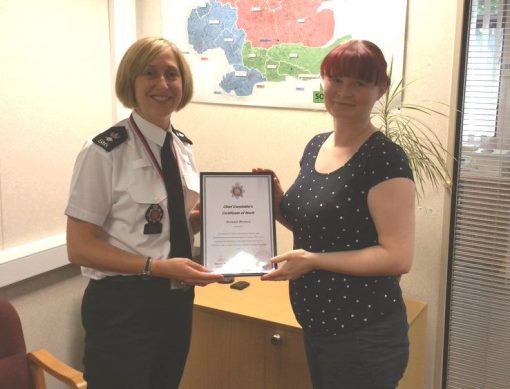 An Essex paramedic has received a police award for helping to apprehend a drink driver.

Barbara Shreeve was on a night shift on a rapid response vehicle in Loughton when she spotted a man driving a car erratically.

She managed to stop the driver and called for back-up at the incident last October.

Last week she was presented with a Certificate of Merit from Chief Supt Rachel Nolan, of Essex Police, for pulling over the man who was later charged with drink driving.

Barbara said she was “surprised” to receive the award.

“I’m sure anyone would have done the same as he was swerving over the other side of the road.

I just pulled the driver over and an officer from Loughton came to assist me while I waited for the police. I think the chap was about four times over the limit. I was quite surprised to get the award.”

“She saw the vehicle was being driven erratically, recognised the potential harm it posed to other road users, and took action to stop it despite the potential risk to herself.

“Her actions may well have prevented tragedy.”