You are in:
Home/ In the news/ August wedding back on after Swaffham man recovers from cardiac arrest

August wedding back on after Swaffham man recovers from cardiac arrest 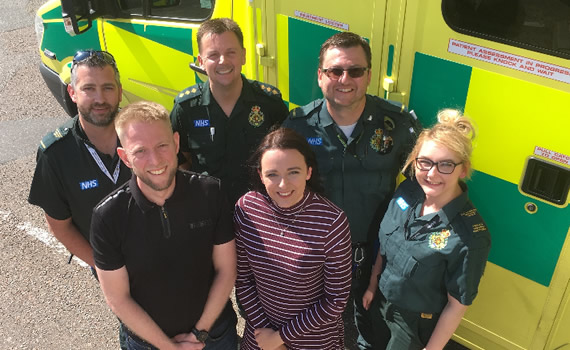 James Buckenham, a 31-year old former soldier and now truck driver, was normally quite fit and had no family history of heart problems, so he didn’t pay much attention when he experienced chest pains at work.

However, at home later that evening the pains didn’t get better and his fiancée Sharna Rankin became concerned and called 111. They immediately alerted the ambulance service: “I was Googling my symptoms while Sharna called 111, and it was only then that I realised that I could be in trouble,” said James.

East of England Ambulance Service NHS Trust sent an ambulance staffed by paramedic Mark Salter and Associate Ambulance Practitioner Jemma Carnell, who quickly assessed that there was a serious problem: “There were some changes in the Electrocardiogram that I was not happy with, so we quickly got James in the ambulance and headed for the nearest A&E department at Queen Elizabeth Hospital, King’s Lynn,” said Mark.

However, near the village of Middleton, James suddenly slumped forwards – in cardiac arrest.
Sharna, who was travelling in the ambulance with James said: “By the time that he fell forward, Mark (the paramedic) was on his feet and had begun resuscitation.”

The ambulance pulled over so that both clinicians could work on James, and they summoned another crew to help.  After two rounds of being shocked with a defibrillator and heart compression, James began breathing again.

The ambulance crew then decided that James needed to be taken to the Norfolk and Norwich Hospital – a longer trip, but James needed the specialist care available there.
Once admitted James was stabilised and a scan revealed that blood clots had caused a 16mm blockage in one of his arteries.  The next day a stent was inserted into his artery, immediately relieving the pressure.

Although now on a range of medications to manage his condition, James has made a full recovery and will shortly be returning to work.

More importantly, nearly four months to the day after his heart stopped on the way to hospital, their wedding in Swaffham is set for August.

Both James and Sharna praised the ambulance crews: “I have no permanent damage, and am able to return to work, which wouldn’t have been possible without the swift action of the crew,” said James.
Sharna said: “If I’d been on my own, I wouldn’t have been able to do what they did. If I’d left the call to 111 another 20 minutes, James wouldn’t have made it.

“They’re incredible, it seemed like ages in the back of the ambulance, but it was just a few minutes…

And now I’m planning on wearing white instead of black because of these guys.”