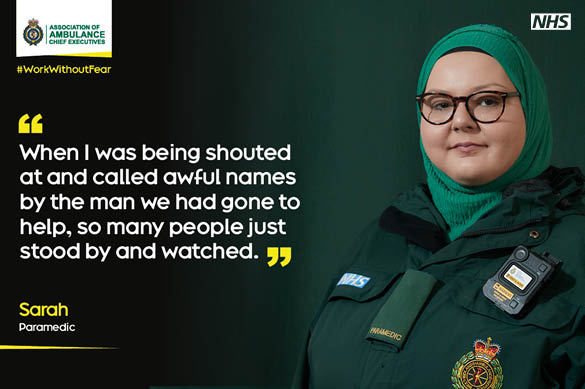 Ambulance staff who have been attacked while on duty are leading a national campaign to stamp out soaring cases of violence and aggression against emergency workers.

Latest figures for the East of England show a 23% increase in incidents of abuse involving ambulance staff over the last five years, with 1,112 incidents of abuse and assault being recorded in 2016-17 compared with 1,387 in 2020-21.

Incidents ranged from persistent verbal abuse (including racial and sexual abuse) to assault with weapons.

The Association of Ambulance Chief Executives and NHS England has launched the #WorkWithoutFear campaign to highlight the profound impact of the abuse on the everyday lives of ambulance staff.

The campaign is supported by EEAST’s Chief Executive, Tom Abell who said:

“It’s time to call out this terrible and unacceptable behaviour and demand that it stops.

“Our talented people across the region do amazing work and have a right to work without fear.

“The effects of both physical and verbal aggression to our frontline and control room teams have a significant and lasting impact, affecting every aspect of their life.”

The campaign is designed to raise awareness of the impact of this behaviour on individuals and emphasises that it is totally unacceptable in any form and ensures that ambulance staff are treated with the respect they deserve.

Nationally, on-the-road staff suffer the most with verbal and physical assaults, affecting more than 6,000 individuals across England in 2020-21 (an increase of 171% over five years).

Staff working in emergency operations centres/control rooms experienced just under 800 verbal assaults in 2020-21 (an increase of almost 60% over five years).

Alcohol is the most prominent factor in assaults against ambulance staff, followed by drugs and mental health issues. Race and sexuality have also increased as exacerbating factors in these assaults.

Assaults against male staff have increased by just over 15% during the last five years, while female staff have seen a 48% increase in the number of attacks in the same period.

Younger ambulance staff (aged 21-34) have seen the largest increase in assaults compared to other age groups.

Two-thirds of offenders who assault ambulance staff are male and one third is female.

Pledge your support for the campaign by using #WorkWithoutFear on social media.