You are in:
Home/ In the news/ Ambulance service stars celebrated at annual awards evening 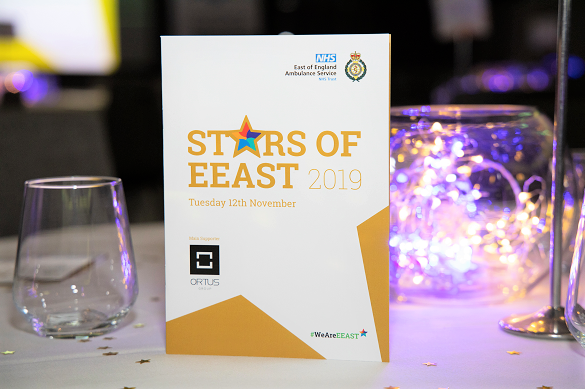 Stars of EEAST is our annual awards evening which celebrates and recognises special contributions and long service of our staff and volunteers.

The event was held on Tuesday 12 November at Wyboston Lakes Resort in Bedfordshire.

Around 200 guests celebrated as 23 awards were presented to dedicated colleagues by ITV News reporter, Sascha Williams.

120 staff and volunteers received long service awards this year and many attended to collect theirs in person.

This included the Lynne Storrie Award for a student in training who has proved themselves to be exceptional, which was presented to Longwater-based Josh Blackburn. Josh successfully completed an intermediate ambulance practitioner course in Newmarket and progressed to the role of advanced emergency medical technician. The award is in memory of ambulance technician Lynne Storrie who died in a road traffic collision whilst driving home from the Trust’s Bedford training centre in February 2001.

Staff were also presented with medals for 20, 25, and 35 years’ long service and the Queen’s Medal for long service and good conduct – a medal especially for ambulance staff presented on behalf of Her Majesty the Queen by the Lord-Lieutenant of Bedfordshire, Helen Nellis.

Interim Chief Executive, Dorothy Hosein said: "None of the progress we have made in the past or will make in the future is possible without the commitment, compassion and contribution of all our colleagues, whether they be directors, managers, staff or volunteers supporting their communities. We also know that what they do is not possible without the tireless support and encouragement that they receive from their families and loved ones.”

Chief Officer Commendations:
• Nicholas Allen and David Gibson (Huntingdon - Emergency Operations) for showing tremendous bravery and selflessness when they saved a patient’s life by pulling them from a burning car.

• Bedfordshire police officers James Ashbourne and Michael Gallagher also received the accolade for their quick-thinking in saving the life of a baby, who had gone into paediatric arrest.

• Jessica Kyle and Matthew Smith (Southend Emergency Operations) after they showed outstanding courage when they were called to a domestic incident where two people were on fire, suffering burns themselves as they selflessly tried to save lives.

• Jia Yi Wan (Hertfordshire patient’s daughter). Nine-year-old Jia showed courage beyond her years when she acted as translator after her dad had suffered a heart attack, helping to initiate care which went on to save his life.

Keith Marshall Award for Distinguished Service in Community First Responders (CFRs) – Pete Goodey (Cambridge and Peterborough)
Pete offers a fantastic service to patients in the Wisbech area through his voluntary role as a CFR with our Trust. During the summer, Pete went the extra mile to provide back up to crews during a call to a cardiac arrest.

Volunteer of the Year – Indra Jones (Community Engagement Group, Hertfordshire and West Essex)
Indra has made a huge impact on the training and education department since she began volunteering with EEAST last year, putting her skills and knowledge from her university background to good use, to help improve the teaching we provide.

WeAreEEAST Value Award, Quality - Craig Maxwell (Patient Transport Service, Cambridge and Peterborough)
Dedicated Craig has worked tirelessly during a secondment to the PTS control room, to improve the service which patients receive and the environment for colleagues. He has maintained his professionalism and enthusiasm in the face of rising demand and while short of staff, often completes extra hours to keep our patients safe.

WeAreEEAST Value Award, Honesty - Bessie McEwan (Out of Hours Support Service, Bedfordshire and Luton)
Caring and empathetic, Bessie regularly supports staff through challenging personal situations, without judgement or prejudice, offering them a listening ear and the chance to confide whenever help is needed.

WeAreEEAST Value Award, Respect - Ian Riddle (Operations, Mid and South Essex)
Ian is a dedicated, humble and valued member of staff, who ensures that everything he does meets the very highest standards. Respected and well-liked by his colleagues, he is a fantastic team player who never fails to boost the morale of those around him.

WeAreEEAST Value Award, Care - Kelly McLoughlin (Operations, Mid and South Essex)
Friendly, bubbly and kind, Kelly is described as an amazing team member who is a welcome face out on the road, due to the tremendous compassion and care she shows. She will always try her best to help people who are facing difficulties, even as far as inviting a colleague to stay with her family when he had nowhere else to go.

Excellence in Patient Care - Gary Mead, James Watson and Martin Picking,
Make Ready and Operations, Bedfordshire and Luton
Gary, James and Martin have been credited with saving a colleague’s life, after providing him with exceptional support when he suffered a breakdown. Gary remained calm and composed as he reassured his distressed colleague, whilst James and Martin went to pick him up, so that he could get fast access to the help he needed.

Excellence in Innovation - Daniel Hynes (Ambulance Operations Centre)
Daniel has worked tirelessly to promote the use of the MiDoS database across the Trust, to make it easier for colleagues to find information about services commissioned within the NHS and how to access them.

Excellence in Professional Development - Aaron Hill (Operations, Mid and South Essex)
Aaron is living proof that hard work and dedication pay off. He has steadily risen through the ranks since joining EEAST as a call handler seven years ago, taking every opportunity for personal development to qualify in his dream role as a paramedic earlier this year.

Excellence in Community Partnership - Darren Jensen (Operations, Mid and South Essex)
Dedicated Darren has spent the past year working with partner organisations, to improve the access which vulnerable homeless communities have to healthcare services, shelter and food. Darren has given up his own time to set up clothing banks in our ambulance stations, so that colleagues can make donations to those in need.

Excellence in Leadership - Gemma Willson (PTS, Cambridgeshire and Peterborough)
Despite being new to management, Gemma has quickly proved herself to be an effective team leader, who is well-respected and liked by both patients and staff. She has worked tirelessly and selflessly to boost morale and trust among colleagues, while also listening to their ideas and suggestions and drawing on their expertise to improve the workplace.

Team of the Year - Senior Operations Management team (Paul Marshall, James Norman and Luke Squibb, Cambridge and Peterborough)
Paul, James and Luke do a fantastic job of showcasing the positive work taking place in Cambridge and Peterborough and sharing best practice across the Trust. They have developed an extensive understanding of their team’s qualities, strengths and weaknesses, and will involve colleagues in local decision-making wherever possible, to ensure that everyone shares the same goals and aspirations.