You are in:
Home/ In the news/ Ambulance service charity event in Essex a huge success 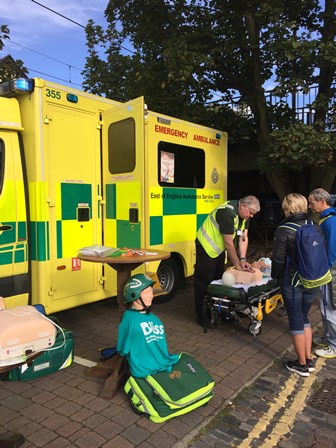 The people of Leigh opened their hearts as well as their pockets at a recent charity event we hosted.

The event, which we were supported with by the Leigh community first responder (CFR) group, not only raised more than £100 for the charity group Bliss, but also was an opportunity to teach basic life-saving skills to more than 50 eager members of the public.

Gerald Bird CFR co-ordinator of the Leigh group said: “It was an extremely successful event; we gave information about volunteering as a CFR to more than 30 people as well as information to get further training in CPR.”

Student paramedic Benjamin Mudd was involved and said: “It was a fantastic event; it is so encouraging to see the public engaged about learning basic life support, and also donating money to an excellent charity.”

He added: “Hopefully we will see some of these eager people volunteering as CFRs in the near future.”

All money raised is being donated to the charity Bliss, who focuses on providing the best possible care and quality of life for premature or sick babies in the UK.

For more information on Bliss, follow this link: http://www.bliss.org.uk/page/yourjourney/our-work

For more information on becoming a CFR, visit: http://www.eastamb.nhs.uk/get-involved/community-first-responders.htm or email: responderadmin@eastamb.nhs.uk