Additional Lifesaving Equipment for Felixstowe, thanks to Felixstowe Community First Responders and the Rotary Club of Felixstowe 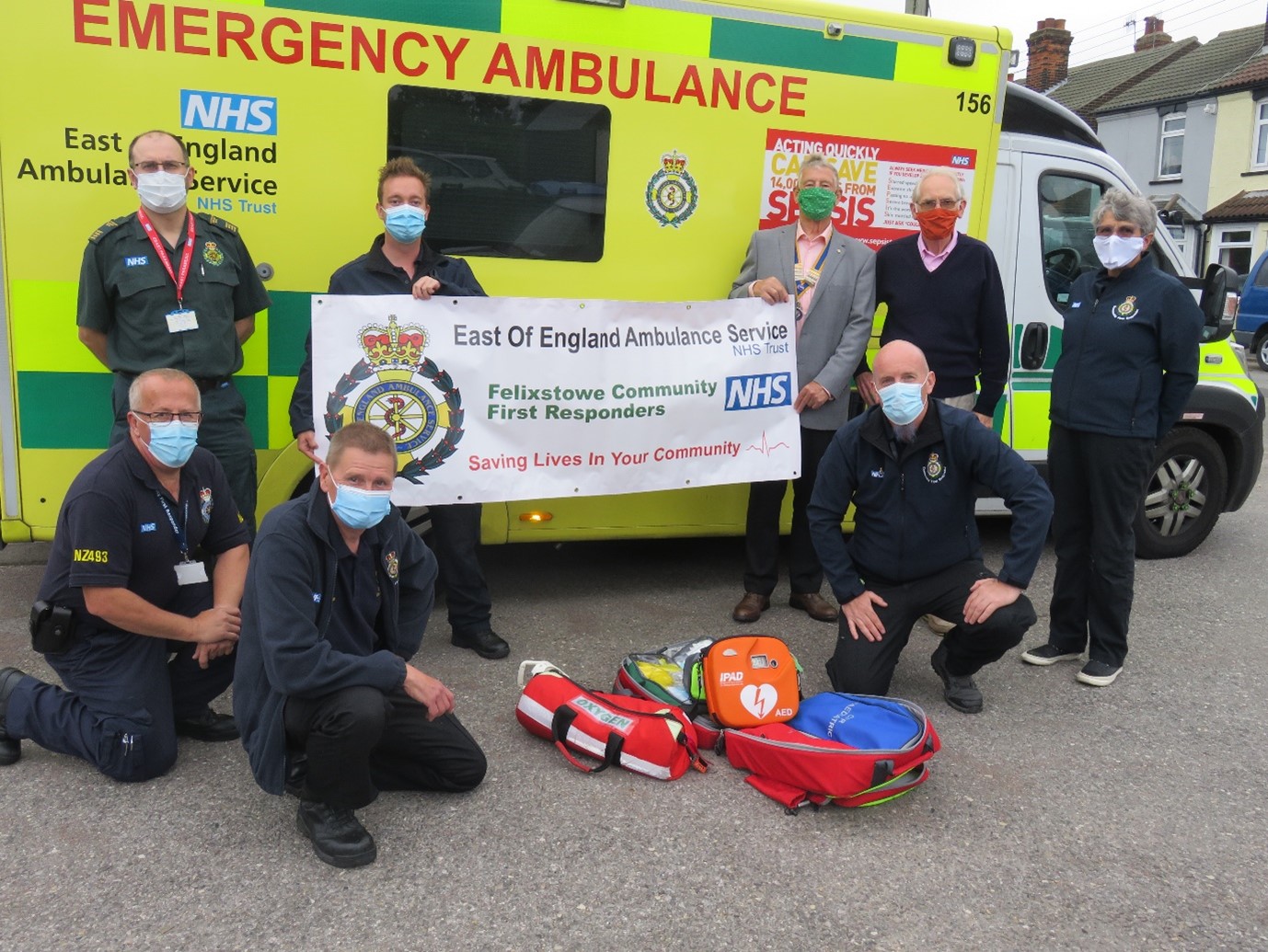 During 2021, the Felixstowe Community First Responders (CFRs) have embarked upon a variety of fundraising activities in order to replace ageing lifesaving equipment. The funds will be used to purchase new equipment in line with improvements to their skillset, running costs and keeping  up with the rapidly increasing size of the team of volunteers. This is in addition to their primary goal of responding to local emergency medical calls in order to stabilise, treat and reassure patients until the arrival of an ambulance crew.

As part of the fundraising activities, the Felixstowe Community First Responders team contacted the Rotary Club of Felixstowe for assistance and were invited to give a presentation to the Rotary Club to talk about their vital role in the local community and the positive impact which it has on patient care in an emergency.

As a result of the enlightening presentation, the Rotary Club of Felixstowe were delighted to have the chance to fully fund the purchase of a fourth complete kit for a First Responder at a cost of £2,184.11.

Club President, Bryan Boreham (shown holding one end of the banner in the picture) said, “We were so taken by the importance to all of our local community of the very valuable role carried out by the Felixstowe Community First Responders team, who are all volunteers, and further impressed by the fact that they proactively fundraise to provide the equipment to carry out this vital role”.

Commenting on the grant, Daniel Jacobs, Community First Responder and Group Coordinator for Felixstowe, said, “We are thrilled to have been granted the funds towards a fourth kit. With our group growing from seven in early 2020 to around twenty later this year, I feel this is a natural progression to allow us to enhance our cover in Felixstowe and the surrounding areas. This is something that will benefit members of the community in their time of need. We are most grateful to the Rotary Club for providing us with the money that we require to purchase vital lifesaving equipment.”

The team of volunteers are trained by the East of England Ambulance Service NHS Trust to respond to a variety of potentially life-threatening conditions, including chest pain, breathing problems and diabetic emergencies and even cardiac arrests, where the patient is unconscious and not breathing.

Each kit carries a variety of monitoring equipment that allows the CFRs to monitor heart rate, oxygen levels, blood pressure and temperature. allowing them to build what is referred to as ‘NEWS2 score. This indicates how unwell the patient is.

In addition, they carry a variety of lifesaving equipment for airway management, oxygen therapy and defibrillation which vastly improves the chances of a patient’s survival if carried out quickly alongside Cardiopulmonary Resuscitation (CPR).

Daniel Jacobs added: “We understand an ambulance cannot be on every street corner, but with a team of qualified volunteers in the local area there is a very good chance that one of us could be your neighbour!”

EEAST’s Charity operates for the benefit of staff, patients, and volunteers. To find out more visit Charitable fund