You are in:
Home/ In the news/ “My goldfish is drowning” - five 999 calls to EEAST that weren’t emergencies 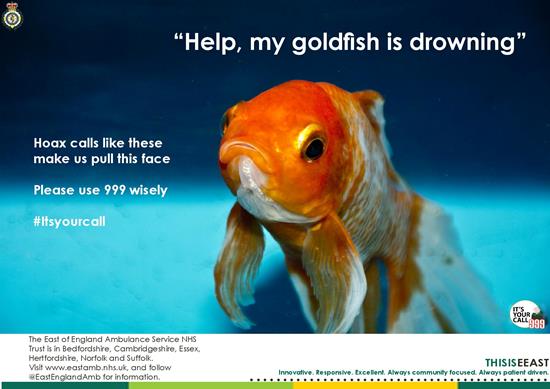 A drowning goldfish, an injured cat, a dead squirrel and a drunk man wanting a taxi sound like elements from a dark comedy.

Instead, they are the latest ‘emergency’ calls received by the East of England Ambulance Service NHS Trust (EEAST) so far this summer.

New figures reveal that the Trust received 1,144 hoax calls over the last two years, which diverted time away from genuine emergencies.

As part of the It’s Your Call campaign, we are highlighting calls like these to make people think twice about calling 999:

Gary Morgan, Head of Emergency Operations Centres (EOC), said: “Just because 999 is an easy to remember number does not mean it is acceptable for people to misuse it or treat it as a telephone directory.

“Hoax and inappropriate 999 calls have the potential to divert attention away from real emergencies and we will refer people who misuse the service to our police colleagues to take action.

“We’d urge the public to remember that the ambulance service is for emergencies such as cardiac arrests, patients with chest pain and breathing difficulties, unconsciousness, strokes, trauma, choking and severe allergic reactions.”

The Trust launched It’s Your Call campaign last year, which aims to inform people and educate others on how 999 calls are handled and prioritised so that in the event of a medical problem, they feel better equipped to know what to do. For more information, visit http://www.eastamb.nhs.uk/your-service/campaigns/its-your-call.htm