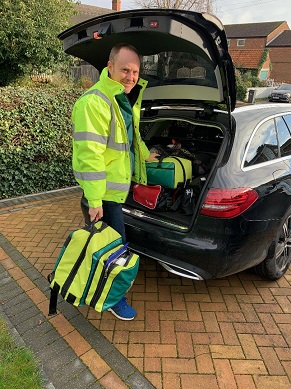 CFRs are volunteers who work alongside ambulance service colleagues and respond to situations within their local community where the ambulance may take longer to arrive than the critical first few minutes following a 999 call. All volunteers are trained by EEAST to deal with life threatening situations, ranging from cardiac arrest, chest pains and stroke to fits, falls, breathing difficulties and severe diabetic attacks.

CFRs also carry an oxygen supply and defibrillator enabling them to deal with the patient immediately and to continue doing so until paramedics arrive at the scene.

The team, which is now five-strong, was established and trained in late 2012 and began responding to emergency calls across north Bedfordshire villages in January 2013. They responded to their first cardiac arrest on 15th August 2014, providing CPR and successfully reviving the patient before back-up arrived.

Since then, the group has continued to go from strength to strength providing an on-call CFR for around 78% of the year. In 2018, the group obtained a second kit bag which meant that two members could now be on-call simultaneously, providing additional coverage for patients in the area. The same year, two members of the group, Dave Sharples and Phil Cocks, were trained to deal with non-injury falls and were equipped with the Raizer chair which enables the team to lift a fallen patient quickly and easily.

During 2020, calls were attended in 27 villages around North Bedfordshire but as well as providing a first aid response, the team regularly delivers sessions on how to use a defibrillator and what to do when someone goes into cardiac arrest. These sessions have been delivered to local villages, various groups such as Young Farmers, and clubs who have acquired their own defibrillators. They have also trained pupils at local schools in the use of defibrillators.

The Riseley CFR group meets monthly either for additional training sessions or for general feedback and discussion. The meeting is also attended by members of the Pavenham and Little Staughton CFR groups as all three groups work closely together.

Phil Cocks, Riseley CFR Coordinator, said ‘It’s a great achievement to have responded to 1,000 local patients and the group should be immensely proud of the support they provid, especially as they are all volunteers who give up their free time to provide this service to the community. First Responders are a valuable part of the EEAST family, and it is good to know that there is that additional level of support out there for our patients when they need it most. We’re always looking for new CFRs to come and join us, whether in Riseley or elsewhere across the eastern region.’

If you are interested in finding out more about becoming a CFR please email: CFR@eastamb.nhs.uk or visit the EEAST website: www.eastamb.nhs.uk