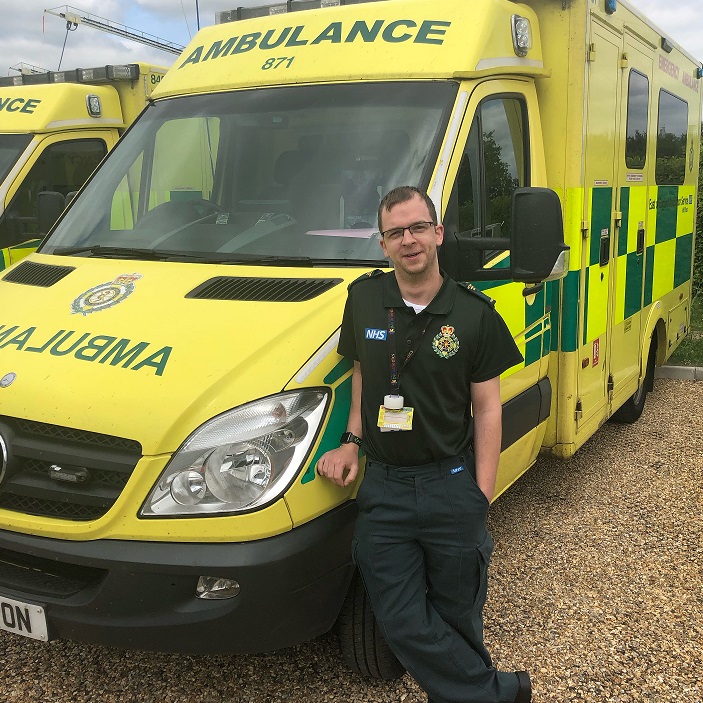 11 years ago, I had just started a foundation degree with the University Campus Suffolk (now University of Suffolk) and was working part-time as a waiter on the side. Although I spent most of my time working and studying, I wanted to undertake some volunteer work as well. This is when one of my fellow students told me about the community first responder (CFR) scheme. Based on what they told me, I decided to join my local scheme in Lowestoft, Suffolk and I have never looked back since.

As part of the scheme, I received training on what to do in an emergency whilst also meeting new people and making new friends. I also learnt about how these schemes are charities and work on donations, so when the scheme needed some new equipment and uniforms, I undertook some fundraising events to raise money.

Unfortunately, between 2010 – 2012 I was unable to respond due to work commitments. During this brief break, I realised how much I actually enjoyed responding and helping those in their time of need. I had previously thought about a career in the ambulance service, but I had never really taken these thoughts seriously until I returned to responding and worked alongside the frontline crews. After talking to them and learning from them, I decided to apply to join the East of England Ambulance Service.

I initially applied to join the Patient Transport Service, but I was unsuccessful in that application so I applied for a few different roles within the ambulance service. Each time I got to the interview stage, but no further, which took a knock on my confidence. However, I persevered, and on 12th January 2015 I began full time employment with the Trust as a student paramedic.

Throughout the training, it was the preverbal rollercoaster with its ups and downs. It wasn’t easy and there were times where I struggled and considered stopping. But, despite this I continued and there was some although there were some delays in training, in October 2018 I registered with the HCPC as a paramedic.

I had achieved my goal and I have never looked back. It may sound cliché, but it’s true – no two day and no two jobs are the same.

Since becoming a paramedic, I have had new doors open up and now as well as working full time for EEAST, I am an associate tutor at the UEA helping with the development of the BSc student paramedics. I have also had opportunities to take part in more training allowing me to provide the best care I can to patients.

I haven’t forgotten where my journey started and where I can, I still volunteer as a CFR and assist in the monthly training for the other volunteer responders.

Even though I didn’t join the responder scheme to become a paramedic, I have found it has been a natural progression and I’m proud to say I have followed in the footsteps of my uncle who used to be a paramedic himself.