Time in the 'Calais Jungle' 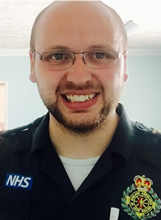 ‘Calais Jungle’ is the nickname given to the encampment in France, where migrants live while they attempt to enter the UK. Ipswich Emergency Medical Technician Michael Bot volunteered to visit the jungle itself to provide medical care and help to the people who live there. Here he shares his story…

Care is instead provided by volunteer agencies like Doctors Without Borders and the Refugee Support, which me and colleague Adam volunteered with.

Our role was essentially to man first aid caravans, with shifts between 10am-6pm; our patient ‘consultations’, for want of a better word, are in three old donated caravans packed to the roof with bandages, paracetamol, ibuprofen and lots and lots of Strepsils! We see roughly one patient every five minutes, and there is almost always a queue outside. There are many nationalities, but those from Afghanistan and Iraq feature heavily, with a small presence of people from Sudan and Egypt.

We assess sore throats, coughs, colds, and minor wounds patients have got through trying to jump on lorries to get to the UK. One thing that strikes me is that lots of people come to us with painful legs, knees and ankles. When asked how or what caused their pain, they mention that they have walked hundreds of miles to get to Calais. One man told me that he walked from Germany that morning!

Some other unique things greet us at the caravan too. Adult chicken-pox is prevalent, and scabies rears its ugly head. Trauma wise, it wasn’t uncommon to see people who had been pepper sprayed, struck with rubber bullets, or had gunshot wounds from their time back in their war-torn country.

It’s a strange place, where people seem to walk for miles each day going from the cook houses to their make-shift homes of acquired wood. People are very resourceful! There are restaurants, shops, clothing stores, churches, a school, library, a mosque….the list goes on. The people have really built a community out of what used to be a landfill site.

Some patients do stay with you, especially the young. A 14-year-old boy from Afghanistan came to the caravan complaining of feeling short of breath, lethargic, having a tight chest and productive yellow sputum cough for several days. He was alone in the camp, has no friends and he feels, and looks, very vulnerable. He speaks no English and talks to me via the interpreter, a refugee himself. Using only my stethoscope, an SPO2 finger monitor, a temperature probe, and my experience, I assess him. Advanced medical help and antibiotics are sparse around the jungle, and doctors are unfortunately not always on hand. The referral pathway or hospital outreach program ‘Salam’ was closed and the Doctors Without Borders team weren’t working that day. It’s a dire situation…my initial thoughts were that he needed some antibiotics and an inhaler - on top of that he’s already showing signs of simple sepsis.

There were prescription-only medications available to me in the caravan, like example inhalers and antibiotics, but was outside of my scope of practice to prescribe them. I opted for 10mls of Six+ Calpol, and advised him to sit up when he goes to bed and visit us the next day, where hopefully a doctor would be available to prescribe some antibiotics and medicines. I felt that’s the best I could do in the circumstances I was presented with.

I saw him again on Saturday morning. His chest sounded worse, his observations had deteriorated, and he had a worsening, ‘productive’ cough. Thankfully, a GP and two junior doctors had arrived that day for me to refer him to. They agreed with my decision and prescribed him Amoxicillin and an inhaler. He didn’t return to the caravan – I really hope his condition improved.

The jungle taught me a lot about how lucky we are in the developed world, and how much we take for granted what we have. It also taught me to not be too reliant on the equipment we have in the ambulance – sometimes using your experience and a stethoscope can work wonders!