Student Paramedic in YouTube series exploring being a Muslim 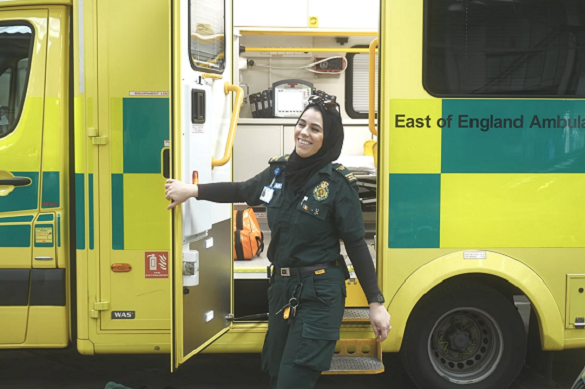 Luton based student paramedic, Teodora Badiu has featured in the latest episode of the 'Being Muslim' YouTube docu-series, talking about how her faith has influenced her life and career.

My name is Teodora Badiu and I am a Student Paramedic based at Luton station.

I was born and raised in Romania and for the last 6 years or so I have called the UK my adoptive home country.

On top of that, I am also Muslim – by choice.

I chose Islam as my religion quite a few years ago. My faith and spirituality play a massive role in my day to day life; at the same time, it has always been extremely important for me to follow my vocation and feel fulfilled on a professional level.

In that regard, my faith has always empowered me to strive and do my best in everything I do, and it has also had a considerable influence on my choice of career.

As a result of that, although I believe in separating personal matters from work and professional life, I choose to speak about my religion whenever I get the chance, because it is such a big part of who I am and also because I like a little bit of myth busting -  so, when the opportunity arose for me to do so more ‘publicly’ (I mean, YouTube is no BBC but still) I decided to take it.

The outcome of that is an episode on The Muslim Vibe - a media platform run by and for Western Muslims – that featured me, a little bit about my experience in the ambulance service and why I chose to change my religion.

The episode is fairly short but trust me when I say I could talk about these topics for hours on end.

We had a lovely time filming on station, and the best part was getting called a celebrity by my colleagues who happened to be on station that day.

What can I say, Hollywood awaits me.