Life in the fast lane as a CCP 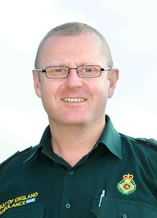 Emergency care has captured the interest of millions as Sky 1’s Air Ambulance ER went behind the scenes to follow the work of Britain’s air ambulance services.

The fly-on-the-wall documentary, the next of which airs tonight (Monday, 18th April) at 9pm, has captured all the on-duty action – including one of our very own Critical Care Paramedic Carl Smith. As well as being a manager here at the East of England Ambulance Service NHS Trust, Carl responds for us as a critical care paramedic (CCP) with the East Anglian Air Ambulance.

Carl writes about the filming, and life in the fast lane as a CCP…

They were a really great team who came out with us. A lot of people don’t like this sort of thing and will do anything to avoid it – I think people are always fearful about making a mistake on camera and then it being viewed by millions. I was definitely conscious that everything I said and did was being recorded…it’s not until you walk out of the toilet that you realise you really should have turned the Go Pro off!

I’m still not convinced the footage won’t turn up somewhere one day when I’m least expecting it….

In last week’s show, we restarted a man’s heart after he went into cardiac arrest. Jobs like that are definitely challenging, but honestly that’s why I enjoy the job so much. Working on the air ambulance means I get to work with some really experienced doctors, many at consultant level, and inevitably if you work alongside people like that all day you just learn so much. Between them and my land-ambulance colleagues, there’s always a great team working very hard together for our patients – and that makes it easier.

There really are too many types of job that we’re called for to name – it’s really any incident where we can provide enhanced care or treatment, but by the nature of what we do we tend to get called to the most critically ill patients the ambulance service sees; I’ve been to a man stabbed in the chest with a kitchen knife, which had missed his heart by inches. We flew him to hospital, and following an x-ray, the knife was pulled out after they had made sure that no major blood vessels had been involved.

Contrary to popular belief, trauma jobs like that are uncommon. People think that the air ambulances only do trauma which is far from the truth. Some of the most challenging jobs we attend are more medical – a particular one which springs to mind is a 20-year-old girl who was having a life-threatening asthma attack. We arrived and she was being manually ventilated by the ambulance crew. When you see that equipment, you know the situation is serious.

My first ever air ambulance call was to a serious collision on the A1 where one person had sadly been killed and another was seriously injured. I was doing observing shifts and after we had loaded the patient I was told to sit in the front. As we were taking off the pilot asked me to shut a small sliding window – I gave it an almighty pull and the window came out in my hand! I turned to the pilot, smiling, and said “this must be yours”. It probably wasn’t the best start to my first day.

I’m a manager within the ambulance service which limits the opportunity to be able to go out and see patients, which is the job we all love to do. By doing shifts on the air ambulance enables me to maintain my clinical standards and see patient, and I love that. I’m actually not a great fan of flying though – I’m happier if there is no wind!