EOC blog: Being a dispatcher 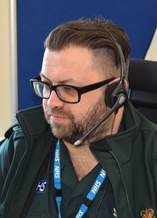 James is a dispatcher working within one of our emergency operation centres. Here he talks about himself and his role within the ambulance service.

I joined the ambulance service back in 2012, first as agency staff and then becoming a permanent employee later that year.

I had previously spent the majority of my career in the hospitality trade but my last job before this was as a business development consultant for an insurance brokers.

I had often thought about a career in the ambulance service, but as a paramedic and hadn't thought about the people ‘behind the scenes’ as such. As it turns out I was at risk of being made redundant so I asked a recruitment agency what vacancies there were and I was told about some opportunities at EEAST. That was a Tuesday - I had my interview on the Thursday and was told I had the job on the Friday!

Being a dispatcher presents new challenges everyday - this can be sometimes come down to the challenges that different area desks may present. I like that the crews and control have a good bond (or at least I like to think so!) and the feeling of knowing you’ve helped to save a life or get a patient the right treatment.

The hardest part of the job is probably trying to find a vehicle for a job once everything is already assigned or on scene with another patient. Knowing that a patient is quite ill and not being able to get to them quickly enough.

I have had some very memorable incidents in my time, including a few involving light aircrafts. The worst for me was a road traffic collision which involved a young patient. The only positive thing I could take away from that incident was that we got the right people on the job and they all arrived in a timely fashion, but the patient was beyond any help. It was a really difficult job, especially for the attending crew who had to go home due to the high level of emotion involved with that situation and that myself, the call handler and the crews all had to be debriefed after.

Where do I see myself in the future? I would like to transition into a patient facing role or potentially work my way up in control, although my dream is to study clinical psychology and move to a different branch of the NHS.