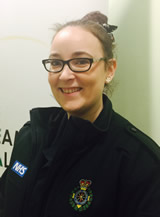 Ahead of EOCTakeover week, we approached Ashleigh, to write about her then role as Call Handler Team Leader.

Hi everyone, my name is Ashleigh and I am a Call Handler Team Leader based out of the Chelmsford Emergency Operations Centre. I first joined back in 2005 when we were still Essex Ambulance Service as a call handler. I was in my teens still and it feels as though I have grown up within the Trust.

Before becoming a call handler for the ambulance service, I worked in retail, but needed to find something full time; I just didn’t know what I wanted to do. It was my mum who saw the advert in our local newspaper, and as soon as I had my interview I knew it was the right role for me. It’s a cliché we hear often, but I really did like the idea of helping people. The idea that in any one day I could be giving CPR instructions or helping someone deliver a baby sounded like the perfect challenge for me. It was also an exciting time to be joining an Ambulance service as there were many changes being made nationally.

As a call handler I loved the contact with the public. I spoke to so many different people on any given day. Some conversations would be brief, others more extensive if I was required to stay on the line until the help arrived. I was able to achieve my aim of helping people, which left me feeling good at the end of the day, even if it had been a particularly bad shift.

After two years I progressed to the role of call handler team leader. I saw this as an extension of both my skills and ambition. I still wanted to help people, but in this role I was helping my staff to help people rather than doing it myself. My favourite thing about the role is getting good feedback from call handlers who have said that I have made a difference to their day. I have come to realise it’s not always the nature of the calls that can affect people, but how the aftermath is dealt with. I try and approach each shift with positivity and keep morale up, especially in the recent busy periods.

As with any role there are some things that I find difficult or stressful. The first week of January was the busiest I have ever worked in my almost 12 year career, knowing that you are doing everything you possibly can but can’t deliver the patient service we would want can be disheartening. However, I personally tell myself that as long as I know I have done everything I can, I can sleep well at night. Knowing that, as a team, we have still managed to help people, and that I personally have made sure my staff feel supported, is a good feeling to have.

People often think that the calls that would stay with you would be the most difficult ones, but personally speaking, as hard as they are; the calls that stay with me are ones that mean something to me on a more personal level. Whilst my mother was terminally ill with cancer, I found myself remembering calls of this nature at the end of the day. That may sound like a negative thing, but I actually think it helped prepare me for what was to come.

Great article Ashleigh. Your mum would have been so proud of you. X