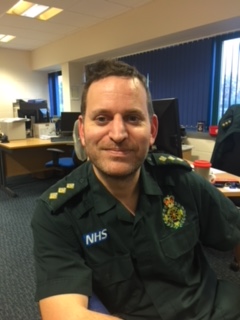 Mark Little is a duty locality officer in Waveney and has worked for the ambulance service since 2004. He and technician Lee Hardy were assaulted by a patient in January.

It was the first time in four or five years that I had a spare shift and went on a rapid response vehicle for the day.

It was all going fine until 2.30pm when I got a shout to a female who had a suspected overdose and was unconscious.

I got there and she was intoxicated and had taken drugs. She was difficult to deal with, but I explained what we were doing and she was compliant.

When Lee arrived as backup the patient decided that she did not like him. However, because she had taken an overdose it was best for her to go to hospital.

Once we got her into the ambulance she was like Tasmanian Devil thrashing about and was all over the place.

She gave Lee a glancing blow and I was pushed over hurting my elbow.

I hit the panic button on my radio, which we only use as a last resort if personal safety is under threat. Police were on scene in a few minutes.

She was arrested and charged by police and was sentenced to 12 weeks custody suspended 12 months as well as a community order.

There is no excuse and physical assaults against staff will not be tolerated. Even if they are intoxicated or taken drugs they are still responsible for their actions.

This incident took five hours of my time to give statements and Lee, which was 15 hours of wasted time.

We need to get the message across that this is not acceptable and it is not normal to be assaulted.

As a solo responder you can feel vulnerable and if I am not happy with a situation I will not advance any further.