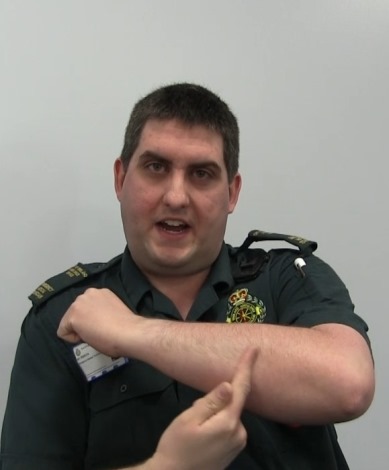 Ian Watkins, who has worked for the ambulance service for almost 10 years, is an Emergency Medical Technician based at Chelmsford.

It happened on 15th March 2017 in Chelmsford at about 8.30am. We were called to a man in his 30s found on the side of the road. He had been drinking and had hit his head, which was bleeding heavily.

He was very drunk and we tried to calm him down and get him into the back of the ambulance. He had a large wound on his head and I said that we would need to take him to hospital.

As soon as I mentioned hospital he started swearing at me and getting aggressive. I let him out of the ambulance and I called the police because he needed to go to hospital. I followed him along the road as it was the middle of rush hour and he was wobbling all over the place and was a danger to himself.

All of a sudden he turned around and started charging at me with his fist and throwing punches. I managed to move out of the way and not get cornered.  He was going for my face and smacked me in the left arm. It was lucky I was not seriously injured. I was in shock and it felt like he’d broken my bones. I do not understand why I upset him because I was trying to help him.

It was our first job of the day and we didn’t get back on the road until 3pm after giving statements.

In April he was sentenced to common assault at Chelmsford Magistrates’ and jailed for six months.

It is the first time I have been physically assaulted, I’ve received verbal abuse many, many times. It has definitely changed the way I approach jobs and I am wearier and on my guard, especially if I’m going to a drunk patient.

I think six months prison is still lenient. There is no excuse and I’m not going to accept it. The more we can get prosecutions, the more the public will understand that it is unacceptable. It should be dealt with harshly.