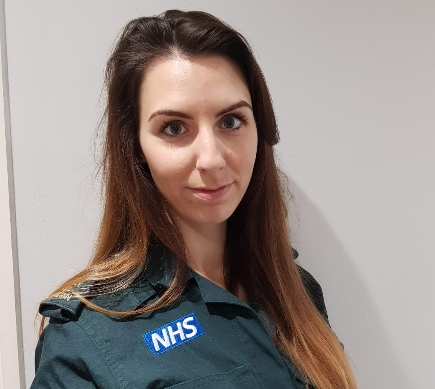 Student paramedic Gemma Brucher has worked for EEAST for four years and is based at Cheshunt, Hertfordshire. In May she was dispatched to a report of a man who had taken a suspected overdose in Hoddesdon.

I have been shouted at and had verbal abuse on many, many occasions. However, this was in a league of its own.

Myself and a colleague were called to a park in the middle of the day. When we arrived, the patient was conscious and laying on the floor. When he saw us he was not pleased that we had been called and got up and was quite agitated.

He started getting verbally aggressive. It happened so quickly, we were there for five minutes when he came at me and head-butted my face. He came at me again, but he tripped over.

My nose was streaming with blood and the man picked up a piece of our equipment and ran towards a lake. My crew mate tackled him to the ground to stop him from hurting himself.

I pressed the emergency button on my radio and the police arrived 10 to 15 minutes later.

I had bumps and bruises on my face and my nose was swollen but not broken. I returned to work about a week later and my confidence was completely ruined for a while.

I think about it every time I go on a job and it affected my sleep for a while and I had flashbacks.

I was devastated that my attacker was let off with a caution because it was out of character and it was his first offence. A flag has also been put on his address so that if the Trust is ever called to him again, we will ask police to attend.