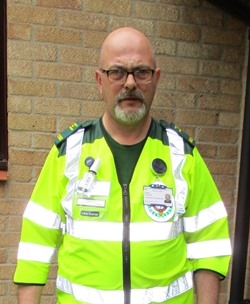 Adrian Garnham is a volunteer with Stutton and Holbrook Community First Responders in Suffolk...

When I first started as a responder, I was working full-time in Ipswich as a bus driver so I would book on during my time off, usually about 10 hours per day and then 24 hours on my days off.

Since I left the job and became a full-time carer for my wife, I am usually on call 24 hours a day, averaging 500+ hours per month since November 2015.

From June 1999 until Dec 2012, I had been a volunteer police officer in Ipswich. When I left in 2012, I had risen to the rank of Special Inspector. At the time of leaving, I had started the CFR scheme in Stutton. I became a CFR after having to call an ambulance for my wife when she became ill. While waiting for the ambulance to arrive, I had cause to call a further three times and it eventually arrived nearly four hours after the initial call. It transpired that it had been sent to another village with a similar sounding name on the other side of the county. After doing some inquiring as to why there was not any sort of emergency medical care closer, I found out about the CFR scheme and decided to apply. As they say, the rest is history.

My highlight would probably be the nomination for the Town 102 FM Local Heroes Award in 2014. I was the winning recipient in the 999 category.

The most challenging aspect is being fairly new to the area and getting to know where the locations were when calls came in. Raising funds for the purchase of equipment and recruiting other responders is the hardest part of all.

Even if someone can only spare six hours a week, that is six hours that could help to save someone's life. In today's way of life, everything is geared to money, earning it, spending it or saving it. No one seems to want to do something for nothing. Becoming a volunteer, not just for the EEAST, can give you a great deal of satisfaction, knowing you have done something to help others that might be in need. A volunteer doesn't have to climb mountains, run marathons or jump from aeroplanes trying to raise money for various causes, just doing the little thing can make the biggest difference.