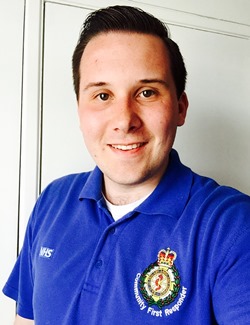 Danny Ayling, is a group co-ordinator for Holland/Clacton CFRs…

I have been a CFR for three years, in the last year I have become a student paramedic so I try to do as many as I can, around 5+ hours a week.

A career in pre-hospital care was always a job I wanted. I became a CFR in the local area to provide immediate care until the arrival of an ambulance crew. Through being a CFR, this has taught me about not every patient will present the same and how to deal with difficult situations that caused me to think outside the box. In the two years prior to starting my course I had seen 100+ patients some who had fallen to those who had a cardiac arrest and required CPR and defibrillation. I was able to take my knowledge, skills and understanding to university and build upon those.

I have had many highlights. As a team we were able to place a community public access defibrillator at a local store. Working within a team to provide the best care to patients who have suffered a cardiac arrest, being able to pass my knowledge on to fellow responders in the group, and setting up Heartstart courses to local people have been other highlights.

I have found trying to recruit new volunteers challenging as well as providing the maximum time we can cover in the area.

For volunteering as little as five hours a week you are providing an extra resource in your area for those time critical patients. In those five hours you could help make the difference between a life lost and a life saved.